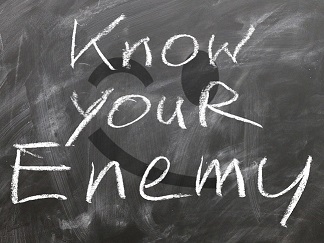 Real Demonology 101 and Why the Mass Shootings!

Lord Jesus Christ please protect us from all evil; thank You.

Evil spirits (demons) exist and are frequently tempting (trying to influence) all of us to choose what harms ourselves and others both spiritually, physically, and relationally.  The demons speak to us either directly, or through using other humans who unknowingly believe what the demons say and obey the demons through what the human chooses to believe, say, and externally do.

Normally with all human beings, demons “speak” to us by mimicking the volume and style of our own thoughts when communicating.  How?  In the same manner as any spiritual being with a Soul: Intellect and Free Will, with no body would communicate;..."telepathically".

We human beings are not only physical beings, we are spiritual beings with a Soul: Intellect and Free Will to choose.  This means that any spiritual being can communicate with us through non-physical means.

There IS a real spiritual world that exists all around us, which interacts with the physical world.

We either ignorantly choose to ignore, become harmed by, and fail to benefit from, those in the spiritual world, or we choose to interact correctly with them in order to both protect ourselves and benefit.  For good spirits as well as evil spirits exist.

The good spirits have historically been called "angels" and the evil ones, "demons".  Obviously we need to protect ourselves from being harmed by the evil, and cooperate with being helped by the good.

Why do evil spirits / demons mimic the volume and style of our own thoughts with the majority of us?

Demons do NOT want us to believe that they exist and interact with us.  Why?  Because if you don't believe your enemy exists and/or you know nothing about your enemy then you are not protecting yourself and they can harm you.

If we believe that evil spirits / demons don’t exist and/or don’t interact with us, then we will do nothing to protect ourselves from them, and thereby, they can easily influence us to choose to believe the lies they say and as a result we choose the evil they want us to do to ourselves and others, while believing the lie that we are right.

Demons have been sneakily attaching themselves to the majority of human beings (for some, since childhood) through habitual sins / vices / addictions, both internal and external that we have chosen, while influencing us to continue, maintain, and increase our bad behaviors (sinfulness) in all areas of behavior both internally and externally, including intellectual and emotional.

Why don't we feel or hear or see that the demons are there?  Again, evil spirits / demons don't want you to believe they exist.  So obviously, they are going to do everything possible to try and keep you ignorant, disbelieving, and unaware.

Therefore, we have to do all that is necessary in order to educate, protect, and separate ourselves from their evil influences.  “Prayers of Authority” are one way that we need to protect and help ourselves. (see the "Free Handouts" page)

There is NO reason to fear demons.  All human fear is always caused by some false/irrational belief we have chosen to believe is reality.

FACT: If we are friends with Jesus Christ, then the demons are very afraid of us.

Demons can NOT read our minds.  And they have no power over us, unless we choose with our free will to give them that power, which many people ignorantly and unknowingly do by either directly interacting with a demon (unknowingly), or by interacting with media and other activities that are a “door” for the evil spirits.  Just a few examples are: violent and/or pornographic: video games, movies, TV, videos, music, images, and print literature.

Demons know most of what is personal from our Intellect / Soul, only because we have volunteered it all through our external behaviors / choices.  And demons have the power to directly affect our memories, if we unknowingly allow them to.

Other than using “Prayers of Authority” (see handout), do NOT directly have a conversation with a demon (also called ghosts).  That is an easy way for them to be able to influence you and obsess you with the potential for possession.

Another word being used as of late to describe demonic "obession" is "opression".  Like all things, obsession/opression and possession are in degrees.  So the belief that a possessed person will always look like what you have seen in the movie "The Exorcist" is completely irrational.

If you suffer from any type of vice / addiction, or sexual misconduct, or sudden emotional break-down, are suicidal, or have any other psychological disorder, including believing one is not the gender that matches one's biology, then you ARE being obsessed/opressed by a demon.

At the very least, the highest degree of obsession/opression has occurred OR a low degree of possession has occurred if you or someone you know starts, at any age, to have any kind of “auditory” or “visual” hallucinations while sober and/or is “being told” to physically harm others and themselves, and/or has memory blackouts while sober and/or stops taking care of their physical appearance while not caring about eating, and/or presents themselves nude to some degree in front of others at atypical times while sober, and/or any other “bizarre” behavior, like saying they are being told things that they are not to tell anyone and the person obeys most of what they are spiritually told to do related to bizarre or harmful orders.

Unfortunately, very few priests and NO “mental health” nor medical professionals are correctly educated on how to recognize the various degrees of the demonic, and instead for the last several decades, have only been labeling people with “schizophrenia” and “bipolar” and shoving them full of harmful psychotropic medications, and nothing else.

Therefore, only go immediately to a Catholic priest who is educated on this subject, or the nearest Exorcist Catholic Priest for the local Catholic Dioceses where you live if anything just described above occurs, and request that they perform an "exorcism" of some degree.  For all Catholic priests have the power to perform all degrees of "exorcisms" other than "solemn / formal", and a Solemn/formal Exorcism is not needed in regard to Psychological Disorders.

And if the Diocese or Priest wants to contact a mental health professional first in order to first see if you only have a mental illness, then they have drunk the FAKE Psychology "kool aid" and you need to contact a different Catholic Diocese.  Because it is a fact that all Psychological Disorders; a.k.a. "mental illnesses" have a demonic factor in some degree that needs to be removed.

We cannot do; live and be whatever the "hell" we want and think that we will be psychologically healthy, which is opposed to Fake Psychology thinking.

And if you are a Catholic priest or know of a Catholic priest who is educated on this, please have them contact us here through our website at theologyofthesoul.org, so that we may compile a list of those who know how to properly help.

In addition, we support you getting a brain scan in order to check for a tumor or lesion in the brain that can be a possible partial cause or simply an exacerbation, which would not negate demonic influence and free will choices.  If the scan comes out normal, then it is 100% demonic and psychological. (paragraph added on 2/27/2018)